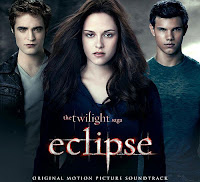 One of the biggest movie phenomena's since Harry Potter has captured the youth of this country. The latest movie in the "Twilight" series will be released on June 30 entitled "Eclipse." So, why shouldn't the soundtrack attract some of the most popular alternative music acts of today.

The "Twilight Saga: Eclipse" soundtrack contains songs exclusively recorded for this album. New songs by Metric, and Muse start things off with their alternative pop sounds. The industrial sounds of Florence + The Machine's "Heavy In Your Arms" is a nice contrast to the gentleness of Sia's "My Love." The playful sound of Fan Farlo's "Atlas" is also a nice touch to the mostly alt-rock soundtrack. The album's highlights appear in the middle with songs from The Black Keys and The Dead Weather. Both songs carry the feel of the movie's overall supernatural vibe. The soundtrack finishes with a welcome addition by Cee Lo Green (Gnarls Barkley), "What Part of Forever" and "Jacob's Theme, " the only instrumental song by Howard Shore.