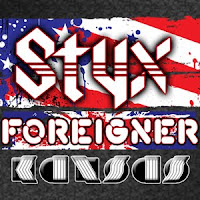 Friday night saw the Mohegan Sun Arena turn into the mecca of classic rock. Three of the bands featured that evening had a combined twenty-six “Top 20” hit singles including two chart toppers. The triple-bill of Kansas, Foreigner and Styx was a dream come true for the packed arena of fans ready to rock.

The band Kansas has just celebrated their 35th anniversary by releasing a brand-new live DVD entitled “There’s No Place Like Home” and were eager to spread the word. Their quick 40-minute set hit the marks with the classic songs “Point Of No Return”, ”Dust In The Wind” and set closer ”Carry On My Wayward Son.” They played their role perfectly by getting the evening started with the thunder of drums and searing guitars.

The rebuilt band of Foreigner contains only one original member. Guitarist Mick Jones knew the pieces he needed to bring Foreigner back from the ashes. Lead singer Kelly Hansen had the looks and moves of Steven Tyler of Aerosmith, but the voice of former lead singer Lou Gramm. If you closed your eyes during the openers “Double Vision” and “Head Games”, you’d swear it was Lou Gramm singing on that stage. The band’s harmonizing on “Cold As Ice” brought smiles to the faces of their fans and even converted some new ones too. The addition of new songs “Can’t Slow Down” and “In Pieces” seemed to fit the band’s image, but long-time fans were only waiting for more of their classic hits. Mick Jones took center stage on the vocals and guitar solo during “Starrider,” but it was the songs “Feels Like The First Time” and “Urgent” that raised the volume in the arena. With the crowd on their feet, Foreigner finished their set with “I Want To Know What Love Is” and “Hot Blooded.” The one song encore of “Juke Box Hero” helped Foreigner set the bar for the evenings’ rock show.

Dressed in suits, Styx took the stage just shy of 9:45 pm beginning with “Borrowed Time.” The band played it safe by sticking with songs from their heyday. They did not perform one song that evening that was not written after 1981, except for the Tommy Shaw, Damn Yankees’ cover of “High Enough.” Keyboardist and singer Lawrence Gowan did his best to cover the missing vocals of original singer Dennis DeYoung on the song “Lady.” Original bassist Chuck Panozzo joined the band onstage for their 1978 hit “Fooling Yourself,” but it seemed like the band didn’t “take-off” until the set closer “Come Sail Away.” Fans were happy to see Styx return to the stage to perform two classics from their “Piece of Eight” album, “Blue Collar Man” and “Renegade.” The band sent frisbees and beach balls into the audience as a video montage played in the background. With over three and a half hours of music, this classic rock trio certainly gave fans their money’s worth.

Kansas setlist:
Point Of Know Return
Miracles Out Of Nowhere
Hold On
Dust In The Wind
Icaras – Bourne On Wings Of Steel
Portrait
Fight Fire With Fire
Carry On Wayward Son

Styx was awesome! Foreigner sounded good, but cmon, one original member aint Foreigner! Suite Madam Blue...Killer, Foolin Yourself...Killer, Lady....Killer, Lawrence is fabulous and is a way better showman than Dennis! Seen them both and Lawrence is better. Sooo awesome to see Chuck Pannazzo with the band considering his health situation, closest thing to the original I'll ever see!

That really rocks.Mohegan Sun is one perfect place for different concerts.After the show,you can go on restaurants of your choice or have a shopping.It can be all found on one place at Uncasville Connecticut,the Mohegan Sun.