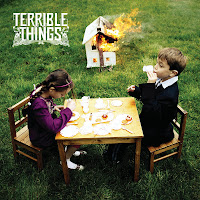 The latest "supergroup" to come together features ex-Taking Back Sunday's Fred Mascherino, Coheed and Cambria's Josh Eppard and Hot Rod Circuit's Andy Jackson to form Terrible Things. The band's debut album was released on August 31 and carries the concept of the reign of arsons that threatened Fred's former hometown in Pennsylvania.

The album carries a heavy weight with its subject matter, but lives up to the expectation. The songs range from the hard rockers "Revolution" and "Not Alone" to the more radio-friendly sounds of "Up At Night" and "Conspiracy." The song "Been Here Before" shows a softer side to the group's overall sound. The lyrics and acoustics capture the true feelings of the song's meaning. The album's concept comes shining through on the closer "The Arsonist's Wife," which shows off the band's song-writing talents.

Terrible Things will begin a two month-long tour in October to support their new album. They will pay a visit to The Space in Hamden, CT on October 15. For a complete list of tour dates and album information, visit www.myspace.com/terriblethings.
Posted by JP's Music Blog