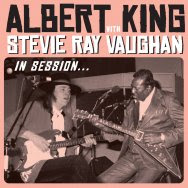 In December 1983 at CHCH Studios in Ontario, Canada, an established blues legend and a rising blues prodigy met and performed together for the In Session television show. Blues legend Albert King influenced everyone from the Rolling Stones to Eric Clapton with his guitar playing and song-writing. While Stevie Ray Vaughan was becoming a big musical star with his break-through blues album "Texas Flood" and his guitar work on David Bowie's "Let Dance." Now, 27 years later, this meeting was released November 9 in a deluxe edition CD/DVD package on Stax Records.

The DVD is a major up-grade from the VHS release and even the original television show. Many of the songs performed for the show were cut during the broadcast for commercial interruptions, but on this DVD you get the full version of all the great songs performed during the show. It just magical to watch Albert King pass the torch to his disciple Stevie Ray Vaughan as he gives him bits of knowledge to help him out in his career. The video quality is a major improvement and the bond that these two share is unmatched. I hope that more musicians take note of this release and copy the idea.

The CD starts off with T-Bone Walker's "Call It Stormy Monday" with King on vocals. Stevie Ray Vaughan wastes no time showing what he's made of as the two trade solos that play throughout the CD. The wonderful thing about this disc is conversions the two have between and during songs. It is almost like being there at this jam session. Vaughan gets his spotlight to shine on vocals during his song "Pride and Joy", but sadly that is the only song on the CD in which Stevie gets to sing on. It's great to hear King talk about his new recording of the BB King classic "Ask Me No Questions" and how he wrote and recorded "Blues At Sunrise" with Jimi Hendrix and Janis Joplin. The CD does contain songs that were not in the broadcast, such as "Overall Junction" and "Blues At Sunrise." The only problem I have with the CD is that it is not in order of the session as shown on the DVD, but that is minor compared to all the great music on this set.

The sad thing is that this would be the only time that these two would meet because of the untimely death of Stevie Ray Vaughan. But, it is releases like this where Stevie Ray Vaughan's and Albert King's spirits come alive and you remember just how good these musicians were. For more information on this release, please visit concordmusicgroup.com.
Posted by JP's Music Blog