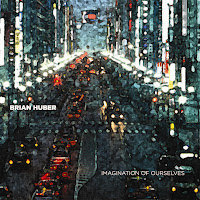 Singer/songwriter/guitarist Brian Huber is releasing his debut solo album, "Imagination of Ourselves" on December 14. This album has been about 12 years in the making and all his hard-work has paid off.

The album's overall pop-rock sound shines on "Talk Without A Word." Brian concentrates more on lyrics than the music as the sound to his songs are very simple. The music of "My Cure" sounds like a carbon copy of Peter Gabriel's "In Your Eyes" as Brian's passionate lyrics are more powerful with the harmonizing of singer Victoria Patchen. Brian's storytelling lyrics find a home in "Shipwrecked," while he has fun with his song "Snuggies." The gentleness of "Semaphore" and the folkiness of "Yellowstone Lake" is where we find Brian's lyrics the most meaningful.

A creative video for "Snuggies" can be viewed at brianhubermusic.com as well as album and tour information.
Posted by JP's Music Blog