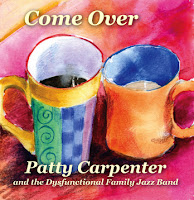 Patty Carpenter and the Dysfunctional Family Jazz Band is anything but dysfunctional. The group has made beautiful music together for the past decade and their latest release "Come Over" is a new high-point for the band. The album is the first to feature all original music and also gets a helping hand by some special guests, including Tony Garnier (Bob Dylan) and James Wormworth (The Tonight Show). Grammy winner Rob Fraboni (The Last Waltz, Bonnie Raitt, Bob Dylan) mastered the recording at Real Mastering studios in Connecticut. The music on this new album does a nice job complimenting the vocals of Patty and her daughter Melissa Shetler.

The album begins with the gentle flow of "Waterfalls." The song has a familiar folk sound with Patty's vocals gentle carrying the song. The band takes a "u-turn" on the album's next song with the experimental ranting of "Come Over." The rest of the album just falls into place with the reggae sounds of "Love Bound" and "Hunker Down." The Dysfunctional Family Jazz Band show off their funky-side with "Mixed Message", but it the smoothness of Patty' voice in "Solace" and "Nancy" where the album shines bright.

The album was released this past summer on Hand Made Recordings and is available through the band's website dfjbmusic.com along with their other albums. Patty Carpenter and the Dysfunctional Family Jazz Band will be performing at the MetroTech Tree Lighting on November 30 and at Adagio's in Brattleboro, VT on December 10.
Posted by JP's Music Blog

Thanks for the great review of our album and your passion for music!