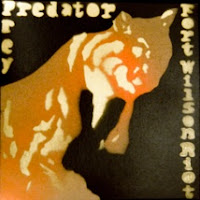 Fort Wilson Riot return with their sophomore release "Predator/Prey." The album finds the duo continuing on the success of their debut release "Idigaragua."

Singer Jacob Mullis' vocals gets highlighted wonderfully by Amy Hager's harmonies on the album's opening track "Forgotten Language." The music that these two produce is magical and at times you forget it's made by only two musicians. One of the most mainstream songs on the album is "Gold-Flecked Morning." It contains the right mix of storytelling lyrics with a comfortable acoustic sound. The duo does like to experiment with styles as noticed on the broadway sounding "Diamond Blues" and "Lately." Jacob's folksiness shines through on part one of the two-part album closer "Pieces Of The War." The second part shows that band does like to let their hair down and rock.

Fort Wilson Riot are currently on tour and will make their way to the east coast at the beginning of December. Look for them to visit your area at fortwilsonriot.com.
Posted by JP's Music Blog