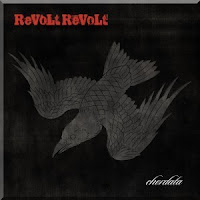 The trio of Chris Bock, Ben Brunn and Jasin Serna have been together for three years now under the name ReVoltReVolt. They recently released their full-length debut album entitled "Chordata" on Spark & Shine Records.

The album carries a Radiohead-type vibe with a very heavy sounding bass and guitar. The band pays tribute on "Black Horse" to some of their musical heroes including Kiss. The trio also disguise a cover of Eddie Money's "Baby Hold On To Me" in "Dead Christmas." The band seems to enjoy performing the music, more so than singing, as they jam on "Farewell Address." ReVoltReVolt know has to rock as shown in the up-tempo "All Alone" and "Discordia" which is a nice break as some of the songs seem to lose the energy and feel of the lyrics.

ReVoltReVolt are wrapping up their West-coast tour this month with Built To Spill. Check out the band's myspace page (www.myspace.com/revoltrevoltmusic) for more information.
Posted by JP's Music Blog