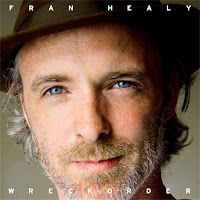 Fran Healy, lead singer of the Scottish band Travis, has finally got around to releasing his debut solo album "Wreckorder." The album was recorded at the end of 2009 with some finishing touches added early this year. It also features contributions from Paul McCartney and Neko Case. The album was released last month on the Ryko/Wreckord Label.

The album carries a mellow sound, concentrating on Fran's gift for song-writing. The song "Anything" just comes and sweeps you up and carries you on an adventure in storytelling. The addition of vocals by Neko Case adds another dimension to Fran's lyrics in "Sing Me To Sleep." "Fly In The Ointment" and "As It Comes" get brought along by a consistent drum/bass line which gives a more alternative sound to some of Fran's songs. But he gentleness of "Rocking Chair" and the moodiness of "Moonshine" helps balance the overall sound of the album.