CD Review: Zion I Gives Us The "Atomic Clock" 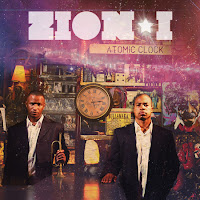 Legendary hip-hop act Zion I will be performing Tuesday, November 2nd at Toad's Place in New Haven, CT as part of their Atomic Clock tour. I admit, I haven't listened to a lot of hip-hop lately, but the new Zion I album "Atomic Clock" has a nice 70's funk sound with some Tribe Called Quest vocals laid over the beats.

The vocal stylings of Baba Zumbi on the opener "Always" reflects those of Q-Tip, while the rock guitars in "4U" add an extra boost to the song's beats. The duo hit their groove on "The Sealing" and "Sign Of Light" will classic hip-hop beats provided by MC AmpLive. Zion I's new album also features special guests Macklemore & Locksmith, Martin Luther and Rebelution. The album's title "Atomic Clock" gets repeated in many of the songs, tying the album together. The album closes with some smooth lyrical rhyming on "Infatuation" and big beats on "The History."

Zion I's seventh album "Atomic Clock" will be released on November 9 on Gold Dust Records. The duo is currently on tour. Visit their website zionicrew.com for a complete list of tour dates and album information.
Posted by JP's Music Blog