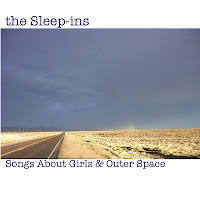 New band, The Sleep-Ins released their debut album this past fall entitled "Songs About Girls & Outer Space." The album has cracked the CMJ Top 200 earlier this month and is moving up the chart. Their hard rocking alternative sound has been compared to fellow rockers The Shins and the Pixies. The Sleep-Ins managed to capture the different sounds of the different locations and studios they used to create this album.

The music on the album ranges from the very tight sounding, well performed songs (Angelina, Desertsong) to the experimental, roughness of "Chrome Skull Cap & Matching Codpiece." The grunge sound that the band tries to capture shines through on "Running Out Here." But just when the band hit their stride with the short "Astro-not" and up-tempo "Bug On My Face", the album ends. With left-over songs from the sessions for this album, look for another release sooner than later.

The Sleep-Ins have a handful of live dates at the beginning of the year in some the southern United States. For a complete list of tour dates and album information, please visit sleep-ins.ingotrock.com.
Posted by JP's Music Blog