CD Review: Barlow Girls Are On A "Journey" 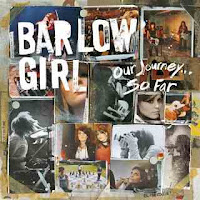 Christian rockers Barlow Girl have released their first greatest hits CD entitled “Our Journey So Far.” The album pulls together tracks from each of the four albums released by this group of sisters. It even includes the Christmas song “Hallelujah (Light Has Come)” and a remix of “I Need You To Love Me.”

The album plays out chronologically beginning with their break-through songs “She Walked Away” and “Mirror.” Both songs were both Top 40 singles on the U.S. Christian charts. The album does a great job mixing the rockers like “Let Go” with the ballads like “Surrender.” The album does include one of the group’s biggest hits “I Need You To Love Me,” but leaves off the group’s highest charting single “Enough.” The sisters definitely know how to rock in “Million Voices,” but it’s their harmonizing that captures your attention.

The Barlow Girls have a handful of scattered dates over the next few months. Check out their website, barlowgirl.com for a complete list of tour dates and song samples from the new album.
Posted by JP's Music Blog