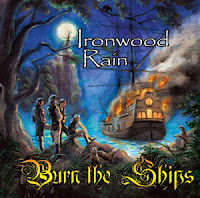 The members of Colorado band Ironwood Rain are not new to the music scene. After years of disappointing musical ventures, the group finally came together to fill the void that each other was looking for. They released their debut album entitled “Trio” in 2008 and they just released their sophomore album “Burn The Ships” this past year. Ironwood Rain have took giants steps forward in perfecting their sound and have finally began to get noticed in the Colorado music scene.

The new album begins with the acoustic guitar strumming country rocker “Ages”. The cleverness of the lyrics with the highlights of violin gives you a feeling of real, true “down to earth” music. The harmonizing of “Fly To You” compares Ironwood Rain to their influences Crosby, Stills & Nash. The title song “Burn The Ships” tells of life lessons with a chorus that just wraps you up until your singing along. The power of Scotte Burns’ songwriting is felt in the soulful ballad “Where A Man Would Stand.” The band does their best Jethro Tull impersonation on the album closer “The Attic” with its combination of mystical lyrics and simple, but meaningful music.

The band will be performing this weekend at the D-Note in Arvada, CO on Saturday and at Buffalo Rose in Golden, CO on Sunday. Check out Ironwood Rain’s website (ironwoodrain.com) for upcoming shows and more information on their latest release.
Posted by JP's Music Blog