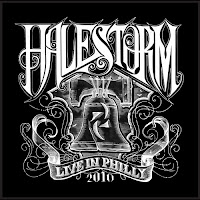 Hard-rockers Halestorm have recently released their first live album entitled simply “Live In Philly 2010.” The Pennsylvania band headlined their first tour this past year and wanted to capture the show in front of their home-state fans. The band is known for its excessive touring, performing over 200 shows a year. Plus, Halestorm’s debut album cracked the Top 40 last year upon its release.

The new live album definitely rocks hard with most of the songs being sped up slightly because of the live setting. The drumming of Arejay Hale especially on the songs “Love/Hate Heartbreak” and the solo “Boom City” really motors this band’s energy. Lead singer Lzzy Hale works with the crowd on the chorus of the ballad “I’m Not An Angel.” The songs “Dirty Work” and the Top 20 single “I Get Off” find the band as a complete unit, capable of conquering any crowd.

The CD also comes with an accompanying DVD of the show. The DVD includes an extra live track from the show (What Were You Expecting) as well as 4 music videos from the band. Halestorm are currently on tour, including at stop at Mohegan Sun in Connecticut on December 30. For a complete list of tour dates and up-to-date information visit the band’s website halestormrocks.com.
Posted by JP's Music Blog