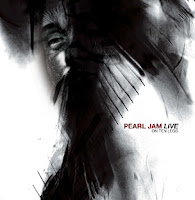 Pearl Jam is celebrating their 20th Anniversary with the release of “Live On Ten Legs” on January 18. The live album is the sequel to their platinum-selling 1998 live album “Live On Two Legs.” The album covers songs performed on tour during 2003-2010. All of the songs were recorded by John Burton and have been remixed and remastered by long-time Pearl Jam engineer Brett Eliason.

The album begins with a great energetic cover of Joe Strummer’s “Arms Aloft.” The slow build of Mike McCready’s guitar strumming and Eddie Vedder’s vocals gets pushed along by the rest of the band’s urge to rock. They keep the energy going with “World Wide Suicide” and “Animal” which features some audience participation. The album does feature four new songs from the band’s last studio album (Got Some, Unthought Known, The Fixer, and Just Breathe). The songs are set up like the ideal set list to a Pearl Jam show. The album carries a jamming version “Rearview Mirror” while the band sounds tight on “Nothing As It Seems”, but they seem to have more fun performing the cover song “Public Image” than some of their latter hits. 18 live tracks from Pearl Jam are definitely worth the purchase of this disc.

“Live On Ten Legs” will be released as a standard CD version, digital download and a deluxe version that included the CD, double-vinyl package, four mini-poster reprints, five live photos and a tour laminate. The album is available now for pre-order from Pearl Jam’s website pearljam.com. It will only be available for purchase through Pearl Jam’s Ten Club and select digital and independent music retailers.