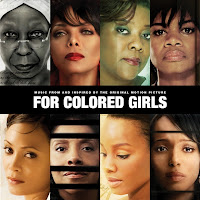 Beginning with the “Main Title” a piano interlude plays in the background as the actresses in the movie recite lines from the movie. Then the music lifts-off with the funk of Sharon Jones with “Longer & Stronger” and the R&B flavor of Estelle’s “All Day Long (Blue Skies).” Laura Izibor brings a ‘70s vibe with “What More Can They Do”, while Zaki Ibrahim gives an updated dance beat to the song “Ansomnia.” The operatic “La Donna In Viola” seems a bit out of place on this soundtrack, but the album gets back into the groove with Macy’s Gray’s “Stand Up.” The album reaches a creative peak with “Four Women” that includes vocals by Nina Simone, Simone, Laura Izibor and Ledisi before finishing with the angelic voice of Leona Lewis in “I Know Who I Am.”

The soundtrack was released on Atlantic Records at the beginning of November and the movie is still in select theaters.
Posted by JP's Music Blog