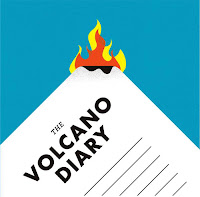 The debut album from indie artists The Volcano Diary was released this past fall and was produced by acclaimed producer Steve Fisk (Nirvana, The Posies, Low). The Volcano Diary is the brainchild of singer/songwriter Alicia Dara. She released a solo album 2 years ago, but was looking for something different in her musical venture.

Her voice captures you right from the beginning with the song "Revival." You get swept up as she sings softly against an acoustic guitar and tapping beat. The music departs briefly from the gentle flow during "Freezerburn" but slows back down for the ballad "Cloud Cover." Alicia's voice goes a bit country during "Lightning Seed" but it is always the centerpiece the songs. The album closes with the 6-minute soft heart-tugging vocals and acoustics of "Volcano."

The Volcano Diary hail from the Seattle, WA area and perform there regularly. Check the band's website (thevolcanodiary.com) for show dates and album information.
Posted by JP's Music Blog