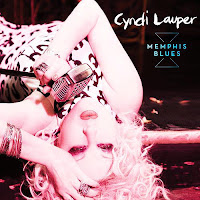 What did she wear? What color was her hair? Did she sing “Girls Just Wanna Have Fun”? These are some of the questions that arise when people hear that you are attending a Cyndi Lauper performance. Everybody remembers Cyndi Lauper as the pop ‘80s icon that had wild hair, an outrageous wardrobe and unforgettable pop lyrics, but when she visited the MGM Grand Theatre Saturday night, she brought nothing but the blues.

Her new album “Memphis Blues” was the primary focus of her set. She was in full enjoyment performing songs that she fell in love with almost a decade ago. Beginning with “Just Your Fool,” Cyndi Lauper gave the spotlight over to her guest harmonica player Charlie Musselwhite, whose solos really brought out the blues. Cyndi told stories of when she met B.B. King and how she fell in love with one of the first female rock stars from the ‘50s, Big Mama Thorton. Her performances of “Shattered Dreams” and “Romance In The Dark” gave Cyndi the opportunity to visit with the audience, standing on chairs singing. Cyndi played her dulcimer only briefly during “Rollin’ and Tumblin’” before finishing her hour-long set with the powerful “Don’t Cry No More.”

Her encore started much the same way her regular set went with a slavery blues number called “Here Is My Hand.” Then, the Cyndi Lauper that the audience knew for so many years shined through. Beginning with the song “Change of Heart,” Cyndi got the audience on their feet continuing with “Girls Just Wanna Have Fun” and “She Bop.” A messy version of “Merry Christmas Baby,” in which Cyndi had to read the words, lead to two other Christmas songs “I Saw Three Ships” and an acapella version of “Silent Night.”

After Cyndi’s last blues song “Mother Earth,” her band left the stage leaving her alone with her dulcimer. She explained how easy it is to make a difference in someone else’s life if you just stand-up and lend a hand, which lead to a meaningful version of “True Colors.” Her voice was strong throughout the performance, but it was her message of equality that won the hearts of the audience.