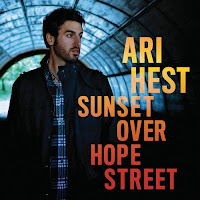 Singer/songwriter Ari Hest is releasing his newest album "Sunset Over Hope Street." It is the artists' first studio album in almost four years. In 2008, Ari launched a successful attempt to write a song a week for the entire year. 2009 saw the release of "Twelve Mondays" which took the 12 best songs from that project and released them. The new album will be released on March 1 through Mercer Street, Downtown Records' imprint label.

Ari Hest wastes no time making you a fan of his music with the opening track "Until Next Time." His voice is strong and his song-writing is even stronger. The song just grows in sound from a simple piano into a rock orchestra. Ari channels Peter Gabriel in the epic sounding "A Way Back Home" before returning to the gentle sounds of "Business Of America." The song "One Track Mind" sounds like it came from Bruce Springsteen's solo album "Devils And Dust" as Ari's vocals carry the song's message of abandonment. The songs "Sunset Over Hope Street" and "Give It Time" display Ari's talents of producing songs of grand orchestration as well as simple acoustics.

Ari Hest will begin his 2011 spring tour with a warm-up show in Hamden, CT before heading out on his cross country tour. He will return to the area in May, before finishing his tour on June 2 at the Mountain Jam Festival in New York. Please visit arihest.com for a complete list of tour dates and information on his new release.
Posted by JP's Music Blog