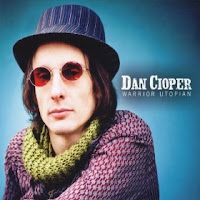 The smooth, country-rock sound of the opening track, "Billionaire Mother Theresas" is a nice introduction to singer/songwriter Dan Cioper. His new album entitled "Warrior Utopian" is set to be released on March 1. The album contains many of Dan's passions including country, folk, reggae and good, old-fashion rock.

Dan seems to have the most fun on the reggae flavored "Satan On The Street" and "My Salvation", expanding upon his song-writing talents. He kicks his heels up for the up-tempo country rocker "Warrior Utopians", but the gentleness of his voice work better along the acoustic strumming of "Man In Rags". His voice reflects a younger Paul Simon in the album closer "Drug Dealer" as he also gives us his best electric guitar chords.

Dan has an album release show on March 1 at Jovita's in Austin, TX as well as a few others dates in the Austin area. Visit danciopermusic.com for more information on his new release.
Posted by JP's Music Blog