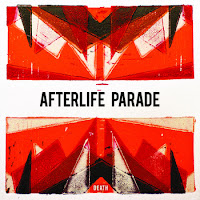 Nashville band, Afterlife Parade, have released their second EP entitled "Death". The new EP is part one of a two-part release (part two entitled "Rebirth" will be released in April). The band has expanded their song-writing with the complex theme of celebrating life through death.

After a short introduction, the album begins with the song "Death" as the lyrics dive right into dealing with aging and dying. The song carries a very strong alternative rock beat with a passionate vocal delivery by Quinn Erwin. The dark tones of the EP are felt in the songs "Nothing But Love Can Stay" and "Simple." Quinn's vocals do reflect those of U2's Bono during the dark atmospheric sounds of "Arrows Fly". The band pick-up the tempo with the album closer "Afterlife Parade" as the music reflects the celebration of new life through death.

The new EP was produced by Jeremy McCoy (The Fray) and is available now. The band does have some live dates scheduled in the southern United States in March. Visit Afterlife Parade's myspace page (www.myspace.com/afterlifeparade) for more information.
Posted by JP's Music Blog