CD Review: Fools For Rowan Got "Twisted. Tied Up. Tangled." 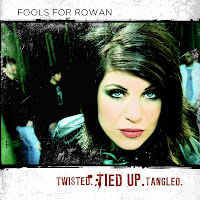 The female fronted, Fools For Rowan are gathering fans the old-fashion way, with simple rock riffs and constant touring. The band released their debut album in 2009 and have been touring the US ever since.

The album's lead-off single "Burnt Around The Edges" is a great introduction to the band's sound. Lead singer Erin Mullins gets to flex her vocals over the song's chorus while the rest of the band just builds up the song's energy. The song reached the Top 40 on college and modern rock radio, along with a video for the song playing in rotation on Fuse TV. The band's second single "Dead" shows us their softer sound as the powerful lyrics carry the song with another strong, memorable chorus. Fools For Rowan return to their energetic rock sound in the song "Tangled," but quickly change gears again with the ballads "No" and "I Don't Have The Strength." The album finishes with the quick drumming of "Living Dangerously" which gives the song an uplifting sound.

The album "Twisted. Tied Up. Tangled." was released in November 2009 and is available on iTunes and on Amazon. The band is once again on tour with dates scattered in February and March. Visit foolsforrowan.com for a complete list of tour dates as well and song samples and album info.
Posted by JP's Music Blog