CD Review: The Frustrators Return With "The Griller" 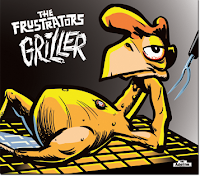 After a 9-year absence, punk-rockers The Frustrators are releasing a new EP entitled "The Griller". East coast rockers Jason Chandler (vocals), Terry Linehan (guitar) and Art Tedeschi (drums) finally found time to get into the studio with Green Day bassist Mike Dirnt and record their follow-up to 2002's "Achtung Jackass". The new 4-song EP will be released on February 15 through Adeline Records.

The energy and chemistry between band-mates is still present in the opening song "Stigma". "West of Texas (Part 2)" is a continuation of a story that was recorded for the band's debut album back in 2000. Lead-singer Jason Chandler sometimes reflects the same vocals as Green Day front-man Billie Joe Armstrong while Terry Linehan plays some surf guitar when the occasion calls for it. The band has fun attempting their cover of The Neighborhoods' teen anthem "The Prettiest Girl" and keep the good times going with "We Need To Talk (It's Not You, It Us)" The song finishes with the lyrics "that's it, we're through, just remember we broke up with you." Could that signal the end of The Frustrators, we'll just have to wait and see.

The band has a short February tour through California. Go to Adeline Records' website (http://www.store.adelinerecords.net/) to order this newest release from The Frustrators.
Posted by JP's Music Blog