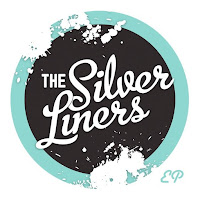 The Silver Liners are returning with another 5-song EP. Songs from this latest release have already been featured in recent live shows as well as radio stations in the Washington DC area.

The rock guitar strumming that leads off the album draws you into the band's alternative/pop sound. The Silver Liner's know how to write great guitar riffs as well as an unforgettable chorus as shown in "Hot Mess." They have also realized the less is more as they play the basics in "Better Than Your Boyfriend," but the song is one of the strongest on this new release. The EP finishes with two of the band's most complete songs "Without A Face" and "Just Like The Rest." Now with two great EPs under their belt, I'm eagerly waiting for a full-length album next.

The band has some shows booked in the next couple months in the DC area, visit their website (thesilverliners.com) for dates and locations. Also check out their website to hear samples of their new self-titled EP.
Posted by JP's Music Blog