CD Review: Owen Pye Tells Us "The Truth About Man" 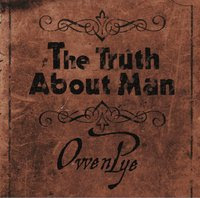 Independent recording artist Owen Pye is releasing his latest album entitled "The Truth About Man." The album will be released on February 22 on Blackroom Records. He also has a 15-date tour scheduled for the next two months.

The album begins with Owen trying his hand at alternative rock with "Keep On Sinning." We hear his talent for writing memorable lyrics in the song's chorus. His passion lies in his acoustic storytelling songs as in "Barriers" and "The Part." The album finds it's groove with "This Morning" and "Freewill," as we hear Owen's voice mesh with the other instruments and musicians. A cover of Johnny Cash's "If I Give My Soul" is a nice surprise as he pays homage to the man in black. The album closer "Aches and Pains" sounds like a jam that was recorded to capture the moment.