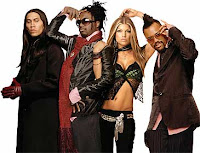 This year's Super Bowl halftime show will be different from the last few years. Instead of having an established classic rock artist (i.e. Paul McCartney, Tom Petty Bruce Springsteen) this year will feature one of the biggest groups in music today, the Black Eyed Peas.

After last year's much flawed halftime performance by rock legends The Who, it was time for a change. The Black Eyed Peas bring a load of hit singles and will be more adaptive to a medley of their songs. It will also bring a younger viewing audience to watch the performance as they can relate to the songs being performed, somewhat live. I'm sure that the Black Eyed Peas can pull off a great halftime performance, but it probably wouldn't hurt either to have a special guest (Slash, Usher) join them on stage for one of their songs.

The Super Bowl halftime performance is also the perfect introduction to get people hyped-up for your upcoming tour in which the Black Eyed Peas have lined up. The group is planning a massive stadium tour this year, so don't be surprised if they announce tour dates in the next few weeks following the Super Bowl.
Posted by JP's Music Blog