CD Review: The Band of Heathens Are Wearing Their "Top Hat" 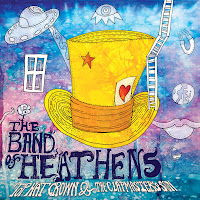 The Band of Heathens return in 2011, with a new album entitled "Top Hat Crown & the Clapmaster's Son." 2010 was a big year for the band with over 200 shows including appearances at Lollapalooza and Austin City Limits. Their 2009 album "One Foot In The Ether" became the #1 album on the Americana music chart. The new album features producer George Reiff (Chris Robinson, Courtyard Hounds) and will be released on March 29.

The album begins with "Medicine Man," the song carries country-blues groove strait out of New Orleans. It's the perfect formula to expand on at live shows. The band's Americana sound shines bright on the songs "Should Have Known" and "The Other Broadway." The blues gets brought out in "Enough" which just adds another dimension to their sound. The band picks up the tempo and energy in "I Ain't Running," replacing their acoustic guitars with the sound of electric, giving the song a '70's rock vibe. The album closes with some more great Americana music, especially the acoustic, campfire song "Gris Gris Satchel." These great songs are sure to give this band their third #1 album on the Americana charts.

The Band of Heathens have tour dates booked from now until mid-April. Be sure to check their website (bandofheathens.com) for a complete list of tour dates as well as information on the band's new release.
Posted by JP's Music Blog

They are gaining immense popularity. Their style is cool in that it borrows from the blues/country sound from New Orleans. That's fantastic. They are blending different elements and creating their own unique sound. You have to love that from any band.