CD Review: Bears On Fire Tell Us "The War Will Be Here Soon" 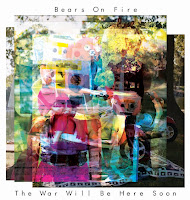 Alternative rockers Bears On Fire have just released their second album in as many years. The band has taken a giant leap forward on this new release in terms of song-writing, production and all-around sound. The self-released album entitled "The War Will Be Here Soon" is available on iTunes.

The album's intro carries a guitar riff that comes right out of the Kings of Leon songbook. The 90 second instrumental is a nice way to get the listeners attention for what's to come. The band has a great sound that alternative radio can't ignore. The choruses of "So Sure" and "Paper Hearts" are too hard to resist. The only cure is listening to the album over and over again. The album's first single "Like It's Hot" has an ingenious idea of a hip-hop chorus sung to an attractive performance of sound. The welcome addition of keyboards helps the landscapes of the songs "Girls Aren't Robots" and "For The Signs". The band does show their punk tendencies in "Foxy", but "Fireworks" is a six-minute pop journey that Bears On Fire bring the listener on. The album closes with the dance hall beats of "Dude Love" which shows off the band's more experimental side.

Bears on Fire are currently scheduling shows for their upcoming tour. Check out the band's website (bearsonfiremusic.com) for more information on this band that's about to explode onto the music scene.
Posted by JP's Music Blog