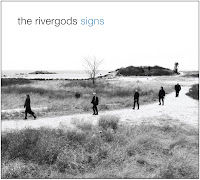 Connecticut's own, The Rivergods are releasing their new album "Signs" on Good Sponge Records. Their CD release party is Saturday, March 26 at the Eugene O'Neil Theater in Waterford, CT.

The new album is led by the husband and wife team of Ben and Nancy Parent. The lead vocals flip back and forth between Ben's pop rock sound and Nancy's powerful folk-sounding vocals. The title song "Signs" is an up-tempo country rocker featuring Mike Finnigan (Jimi Hendrix, CSN, Etta James) on B-3 hammond organ and Vivian Sessoms (Joe Cocker, Stevie Wonder. Pink) on backing vocals to flesh out the chorus. "Roadrunner Blues" has a nice raw, rock sound with just the right touch of acoustic and electric guitars. The folk-style ballad "I Don't Think About You Much Anymore" highlights Nancy's vocals perfectly, while the album closer "Shallow End" is Ben's new height in song-writing.

The new album was produced by Eddie Shea along with Ben Parent and recorded and mixed at The Underground in Ledyard, CT. The album was mastered by Michael Arafeh in Middletown, CT. The Rivergods have a few dates lined up in the New England area. Please visit their website, therivergods.wordpress.com for more information on this Connecticut band.
Posted by JP's Music Blog