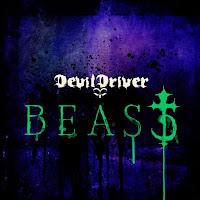 California metal band DevilDriver have just released their fifth album entitled "Beast". The new album "attacks from start to finish" according to lead singer Dez Fafara, "It's an all-out release of pain." The band has had huge success on tour the last few years and is looking to keep the momentum going.

The speed of the drums kicks in to high gear on the album's lead-off single "Dead To Rights". Dez's vocals are strong, powerful and demand your attention. The band motors through "Hardened" which features a rare guitar solo, but keeps the energy up in "Talons Out (Teeth Sharpened)." DeviDriver let their feelings known in "You Make Me Sick" and "Blur" about how people overreact. The album's second single "Coldblooded" is a straight-to-the-point, adrenaline rocker about staying true to yourself. Included is a cover of 16 Horsepower's "Black Soul Choir" as a way of paying homage to the Gothic Americana style of music. The speed and energy just keeps flowing in the closers "Crowns of Creation" and "Lend Myself To The Night."

The album was released in February as a standard 12-track edition and a special 15-track edition that also includes a DVD of the history of the band as well as 5 music videos. DevilDriver have tour dates beginning at the end of April as the band make their way across the U.S. Check out devildriver.com for a complete list of tour dates and album information.
Posted by JP's Music Blog