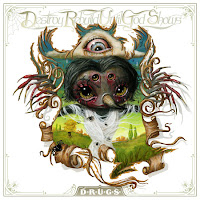 One band's loss is another band's gain as ex-Chiodos front-man, Craig Owens puts together a new group of musicians named Destroy Rebuild Until God Shows (D.R.U.G.S.). Their debut album was released on February 22 and entered the Billboard Music Charts at #29 and #1 on the Billboard Hard Rock Charts.

The band comes roaring out of the gate with the intense energetic "If You Think This Song Is About You, It Probably Is." Lead singer Craig Owens and his bandmates are making a statement with their hard rocking debut single. The right combination of blazing guitars, screaming vocals, a harmonizing chorus is a good way to describe most of the songs on the album. The album's second single "Mr. Owl Ate My Metal Worm" is powered by the drumming of Aaron Stern. The third single, "Sex Life" has a more alternative rock sound supplied by the duel guitars of Matt Good and Nick Martin. D.R.U.G.S. keep the speed up with "Stop Reading, Start Doing Pushups" before giving in to the more pop-oriented "I'm Here To Take The Sky." The album finishes with the aggressive fourth single "My Swagger Has A First Name."

D.R.UG.S. will be joining the 2011 Vans Warped Tour in July, but have two months of tour dates to wrap up first. They'll be making their way across the country hitting the Northeast in mid-April. For a complete list of tour dates and album information, check out thisisdrugs.com.
Posted by JP's Music Blog