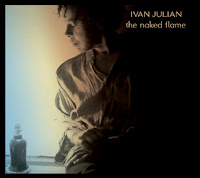 Musician Ivan Julian is releasing his first collection of new songs in over 20 years. The new album entitled "The Naked Flame" will be out on March 29 on 00:02:59 Records. Julian was a founding member of Richard Hell & the Voidoids and has also worked with Matthew Sweet and The Clash. The sound on his new album is very energetic with an almost mature punk feel to the songs.

The album proudly displays Julian's love for performing. You can hear the passion in his voice as he strains to express the lyrics of "The Waves". "A Young Man's Money" sounds like Iggy Pop meets the Sex Pistols with its raw electrical charge. Ivan Julian shows his maturity on "Hardwired" sticking to a more mainstream attempt that keeps you wanting more. "That Look" carries a funky beat that gives the song a 70's vibe. Julian experiments with his sound on "The Beat" and pulls off his Mick Jagger sound-alike in "Sticky", but has the most fun with "You Is Dead".

Ivan Julian just wrapped up a performance at the SXSW festival and will be hosting a record release party on April 4th and the Bowery Electric in New York City. Please visit ivanjulian.com for more information on the latest release from Ivan Julian.
Posted by JP's Music Blog