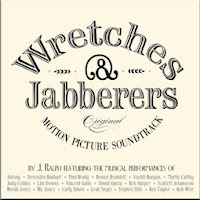 Singer/songwriter/musician J. Ralph has received numerous praise for composing orchestra pieces as well as writing folk songs. After becoming the proclaimed "next big thing" in 1999, J. Ralph retreated to a self-imposed exile. He would return in 2004 with his orchestra piece "The Illusionary Movements of Garaldine & Nazu". Since then, he has written numerous scores for commercials, movies and major sporting events. Now, J. Ralph returns with a cast of all-star musicians for the soundtrack to the motion picture "Wretches & Jabberers."

The soundtrack begins simple with J. Ralph's warm voice dancing around an acoustic guitar on "The Reasons Why". The album then gets taken over by guest musicians including Norah Jones's sultry piano and singing on "Change Is Gonna Come" and legend Carly Simon's fragile voice on "The Letter." Ben Harper adds the gentle touch of his voice in the powerfully moving song "More Like You." Vashti Bunyan's angelic touch enwraps "Flower & The Lion" while Bob Weir gives us "Breaking The Hold" which sounds like it was plucked from the Grateful Dead's acoustic American Beauty/Workingman's Dead era. Ralph's vocals return with help from Devendra Banhart in the tribal beats of "Lying Down Statues." The album also includes songs from musical legends Judy Collins and Stephen Stills. Actress, singer Scarlett Johansson gives a smokey nightclub feel to the song "One Whole Hour" while Bonnie Bramlett's soft whisper-like vocals barely appear in the quiet "Breakers & The Wind". One of the major highlights of the album is the return of Nic Jones after a 30-year absent to perform the vocals on "Pretty Words Lie". All of the twenty songs of this soundtrack have a moving message of Autism for all to hear.

The album will be released on April 5 exclusively through Barnes & Noble Bookstores. The film has screenings planned through July of 2011. Visit the movie's website (wretchesandjabbers.org) for a complete list of screening dates and soundtrack information.
Posted by JP's Music Blog