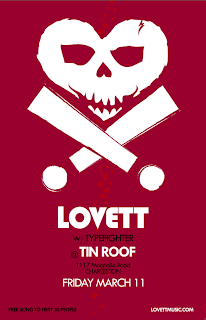 Georgia musician LOVETT is self-releasing his debut album "Highway Collection" on March 15. The album boasts contributions from The Avett Brothers, Mars Volta, Cursive, Spiritualized and The Sonos Quartet. The diversity is heard throughout this release, but LOVETT does a great job making the different musical genres work together.

The album leads-off with the country/folk sounding song "The Fear". While the guitar and lyrics are straight-forward, there is a lot going on in the background that leads to the song's big finish. The album's single "Heartattack" shows us another side to LOVETT's sound with electronic drum beats and a more grand alternative rock sound. LOVETT switches gears again with a simple pop song "Same Old Song" almost daring you to hear all that is going on within the music. The gentle acoustics of "Like A Moving Train" and "Two Lovers" puts the emphasis on the lyrics which take you on a storytelling journey.

LOVETT has a tour beginning March 9 in the Carolina's. He will also be making an appearance at the SXSW festival in mid-March. For more information about LOVETT and his new album, as well as videos, please visit lovettmusic.com.
Posted by JP's Music Blog

How can I print what is in a purchased CD which I can only review at the computer?

You may have to take a screen shot of what is on you monitor in order to print what you would like from an enchaned CD.