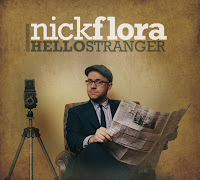 Nashville's own Nick Flora released his second solo effort entitled "Hello Stranger". The new album brings his influences into his song-writing as evidence of Elvis Costello and Randy Newman can be heard all over this release.

The harmonizing intro of "Hello Stranger" gives way to the up-tempo pop strength of "Presence of Greatness". The light sounds of his song "Temp Job" gets carried by the right combination of piano and horns which highlights Nick's vocals. The heartfelt acoustics show another side to his wonderful song-writing. The ballads "Downhearted", "Different World" and "Together" are some of Nick's strongest most complete songs on the album. Nick invites Stacy Lantz to add vocals to the playful duet of "Tired of Me", while the harmonizing on "Long Way Home" gives the song added strength to his already strong lyrics.