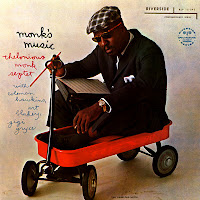 March 15 will see the next wave of releases in the Original Jazz Classics Remasters Series. There will be four albums receiving the remastered treatment. One of these albums is Thelonious Monk's "Monk's Music". This album has been heralded as one of the best album's of his career. It boasts a line-up that included Art Blakey on drums with John Coltrane and Coleman Hawkins on tenor saxophone. How can this album not be a classic and what else could be done to make this album even better?

The first thing that strikes you his how great a job was done remastering this album. Recorded back in 1957, it sounds like you were in the studio with these musicians performing just for you. The wonderfully performed "Well, You Needn't" gives each performer the opportunity to strut their stuff with their own solos. Monk also gives the full-band try to "Off Minor" which was originally written for a trio, before expanding once again with a 10-minute version of "Epistrophy".

The new album also carries three bonus tracks recorded during the same sessions. Different takes of the songs "Off Minor" and "Crepuscule With Nellie" give the listener another view to the song's structure before Monk settled on the final piece of music. Also included as a bonus track is the song "Blues For Tomorrow" in which Monk himself does not appear on, but performed by his band the day prior to recording the album.

"Monk's Music" should not only be considered one of Thelonious Monk's best albums, but one of the greatest Jazz albums ever recorded. The newly remastered CD will be released by the Concord Music Group. for more information on these newly released Jazz albums please visit concordmusicgroup.com.
Posted by JP's Music Blog

Yes that album was not only a classic....it's legendary. It had an all-star cast that played as good as anybody. I love it when the old classics are remastered for us to listen to in the modern day.