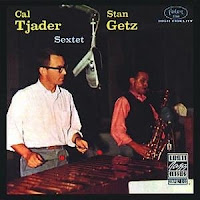 March 15 will see the next wave of releases in the Original Jazz Classics Remasters Series. There will be four albums receiving the remastered treatment. One of these albums is the meeting of xylophonist Cal Tjader and tenor saxophonist Stan Getz. The two met to record an album of standards with a few originals thrown-in. Included in the backing band was pianist Vince Guaraldi who later became know for his own trio performing the Charlie Brown classic "Linus and Lucy".

Recorded in 1958 at the Marines Memorial Auditorium in San Francisco, this recording shows how professional a group of performers, who never played together before, can produce a timeless album. The 11-minute, up-tempo "Ginza Samba" is a great way to start off an album. Cal Tjader's vibes-work is just spectacular. The clarity of this 50+ year old recording is still outstand. The originals, "Crow's Nest", "Liz Anne" and "Big Bear" spotlight Cal Tjader, but also allow Stan Getz and Vince Guaraldi to explore the compositions.

Their are no known out-takes to exist for this recording, so what you get is over 40 minutes of great Jazz done on only one- or two-takes. The newly remastered CD will be released by the Concord Music Group. for more information on these newly released Jazz albums please visit concordmusicgroup.com.
Posted by JP's Music Blog