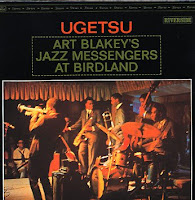 March 15 will see the next wave of releases in the Original Jazz Classics Remasters Series. There will be four albums receiving the remastered treatment. One of the most deserving albums in this series is Art Blakey's Jazz Messengers at Birdland "Ugetsu". This album features a live performance from one of the best jazz bands of the 1960's.

The energy that this version of Art Blakey's Jazz Messengers puts out for this performance is felt right in the opening song "One By One". The 11-minute "Ugetsu" just carries you away, and the sound is so good you forget it was performed live.

The new release of this album also features 4 bonus songs that were recorded that same evening, but did not fit on the original vinyl release. While Blakey himself never had a drum solo on the original album, he gives us a taste of his talents on "Conception". The highlight of the bonus tracks is an up-tempo number called "The High Priest" written by trombonist Curtis Fuller. The only complaint I have is that the tracks are not in order of how they were performed, but this is in order to keep the original album in-tack.

The newly remastered CD will be released by the Concord Music Group. For more information on these newly released Jazz albums please visit concordmusicgroup.com.
Posted by JP's Music Blog