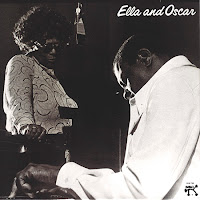 March 15 will see the next wave of releases in the Original Jazz Classics Remasters Series. There will be four albums receiving the remastered treatment. This album features two of the all-time Jazz greats, Ella Fitzgerald and Oscar Peterson. The album entitled "Ella And Oscar" shows that sometimes less is more.

Listening to this album, you feel like you stepped back in time and found Ella and Oscar performing together at some Las Vegas lounge. Ella voice is perfect, her scat singing on "When Your Lover Is Gone" is priceless. Oscar Peterson gives Ella the spotlight, but takes his piano solos whenever the moment calls for it. Ray Brown adds his bass to a handful of songs, but only to flesh out the sound little more. The duo pick up the pace on "I Hear Music", but the album closer "April In Paris" is reason alone to get this album.

The new release also contains previously unreleased bonus tracks. The bonus tracks contains alternate takes to four of the songs already present on the album, but it shows another side to the song's progress.

The newly remastered CD will be released by the Concord Music Group. For more information on these newly released Jazz albums please visit concordmusicgroup.com.
Posted by JP's Music Blog