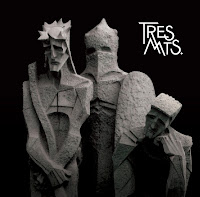 The band, Tres Mts. is set to release their debut album entitled "Three Mountains" on March 8th. The members of Tres Mts. are Jeff Ament (Pearl Jam) on bass, Dug Pinnick (King's X) on guitar and vocals, Richard Stuverud (The Fastbacks) on drums along with guitar help from Pearl Jam's Mike McCready. The idea of this album has been in the works for almost two decades. The writing sessions began in early 2001 and again in 2004 before the band members finally met together last year to finish writing and recording about 13 songs. The groups different musical backgrounds are heard throughout this new release.

The album begins with the album's first single "My Baby" which is an "in your face" hard rocker. The band's love of punk music shines through on this opening track. The energy still flows in "Oh, Lord" before the band slows the tempo down for "God Told Me." The song "Holes In The Road" draws upon Dug Pinnick's hard rock roots with McCready lending a hand on the solo. You can almost pinpoint the years when some of the songs were written, as "In The Middle" sounds like a reflection of a Pearl Jam song written in the past decade. Tres Mts. show off their bluesy side on "She's My New Song", but don't stray too far from their formula, returning strong in the ballad "Break" and the up-tempo beats of "Mystery."

The band has booked a mini-five date tour in the northeast starting in March, which also includes an appearance on Live with Jimmy Kimmel. The album is currently available for pre-order from Pearl Jam's website (pearljam.com). The album will be released through Monkeywrench Records. For more information, please visit tresmts.com.
Posted by JP's Music Blog