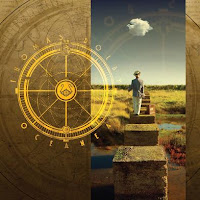 Thomas Dolby, the 1980's breakthrough artist, is returning to music after a 20-year hiatus. Thomas Dolby hit it big in 1982 with the single "Blinded Me With Science". He went on to work with such acts as Def Leppard, George Clinton, Jerry Garcia and David Bowie. He quit the music industry in the early '90's and became an inventor. In 2006 he returned to music appearing at O2 in Hyde Park and London's Scala. After making only a handful of other live appearances, he decided to dive into his first album of new material since 1992.

Thomas Dolby is releasing a new EP entitled "Oceanea" on March 28. The EP is an introduction to his new album "A Map of the Floating City" which will be released this summer. Recorded on his solar powered lifeboat, the songs carry a very gentle, smooth flowing sound. The barely heard synthesizer floats in the background of the vocals supplies by Dolby and guest Eddi Reader on the EP's title track. It gives you the feeling of being alone on the sea. "Simone" is a more structured song featuring a sax solo from Joe Cohen. The acoustic strumming of "To The Lifeboats" is the perfect background for Dolby's voice. The song builds-up to a more modern pop feel with the chorus but quickly returns the soft sounds of acoustic guitars.

Thomas Dolby is not only busy finishing his new album, but he has also created a social-based network game entitled "The Floating City". This puzzle-solving adventure will allow fans to discover new songs as well as win tickets to a private show this summer. For more information, please visit thomasdolby.com.
Posted by JP's Music Blog