CD Review: Those Dancing Days Grow-Up On Their New Release 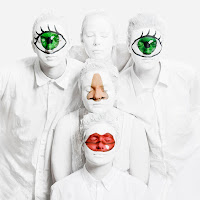 Swedish alternative rockers Those Dancing Days return with the release of their sophomore album "Daydreams and Nightmares". The all-female band had come a long way since their 2008 debut. Their song-writing has grown as well as their ability to catch your attention.

The album's first single "I'll Be Yours" is pure power pop. At times, the band draws strong similarities to veteran alternative rockers No Doubt. The mainstream sound of "Can't Find Entrance" really puts lead singer Linnea Jonsson's vocals on display. Those Dancing Days bring out their energy on the punk sounding single "Fuckarias". The surf/punk drumming of Cissi Efraimsson is the motor that drives these songs into your minds.

The new album “Daydreams & Nightmares” was released on March 1 on Wichita Recordings. The band is currently overseas, but will be visiting the US in mid-March performing at the SXSW Festival. For more information on Those Dancing Days and their new release, please visit thosedancingdays.com.
Posted by JP's Music Blog