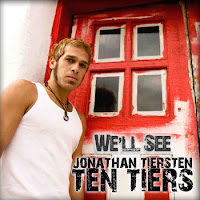 Singer, songwriter, actor, producer Jonathan Tiersten is returning to his musical passion with the release of his new EP, "We'll See". You may recognize his name as he played Ricky Thomas in the cult classic movies "Sleepaway Camp" and the "Return To Sleepaway Camp". Tiersten tried his had at music with a number of different bands, but none of them made him feel as comfortable as performing on his own.

On the new EP, Tiersten sounds like the second coming of David Bowie. He mimics the rock idols vocals in the opener "In The Air" as his band the Ten Tiers motors on. The pop, mellowness of "Vertigo" shows a softer side to Tiersten's song-writing. His voice becomes his own in the radio-friendly "Black Rain" before experimenting on the album closer "Sancta Caecelia".