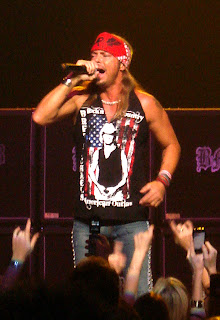 Poison’s front-man, Bret Michaels, took a break from his tour in Texas to make a special trip to the Northeast. The MGM Grand Theater at Foxwoods was the destination Friday night on his latest solo tour entitled “Get Your Rocks Off”.

The lights went out as Guns ‘N’ Roses’ “Welcome To The Jungle” blared out from the speakers. At the conclusion of the song, Bret Michaels’ solo band took over with the intro guitar riff to one of Poison’s biggest hits “Talk Dirty To Me”. Michaels’ high energy entrance brought the entire theater to their feet. Bret proceeded to scan the front stage audience, slapping hands to the delight of the female fans that had rushed to the forefront. The evening was full of Poison’s greatest hits including “Look What The Cat Dragged In”, “Your Momma Don’t Dance” and “Unskinny Bop”. Michaels’ also threw in some covers including Lynyrd Skynyrd’s “Sweet Home Alabama” and Sublime’s “What I Got”. His persona was very personable with the audience as he preached about his new solo album being released this summer and his 25th anniversary tour with Poison. A heartfelt version of the Poison classic “Something To Believe In” was dedicated to the men and women fighting in the United States armed forces as the audience waved their arms in unison to show support. His extremely short set ended with his #1 ballad “Every Rose Has Its Thorn” and an energetic version of “Fallen Angel”. As if on cue, Michael’s exited the stage as exactly one hour had passed.

He returned for a one song encore performing the party anthem “Nothin’ But A Good Time”. No sooner that he exited the stage that the curtain was drawn on a crowd hoping for more. But for good reason, the set was cut short to auction off Bret’s shirts and hats worn that very evening to benefit the American Diabetes Association. Fans need not worry because Michaels will be returning this summer to Connecticut along side his Poison band mates.

Setlist:
Talk Dirty To Me
Look What The Cat Dragged In
Sweet Home Alabama (Lynyrd Skynyrd)
Your Momma Don’t Dance (Loggins & Messina)
Something To Believe In
Unskinny Bop
What I Got (Sublime)
Every Rose Has Its Thorn
Fallen Angel
Encore:
Nothin’ But A Good Time
Posted by JP's Music Blog