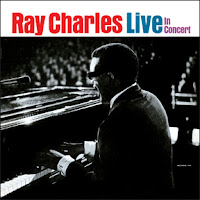 On April 5, Concord Music is reissuing a wonderful, re-mastered, complete recording of "The Genius" Ray Charles "Live In Concert". The album was recorded at the Shrine Civic Auditorium in Los Angeles, CA on September 20, 1964 at the height of Ray Charles popularity. The album was originally released in 1965 as a single vinyl album, but now this new mastered version adds 7 more songs that did not make the original version.

The two instrumentals that begin the show (Swing A Little Taste, One Mint Julep) is a nice introduction to Ray's band. He slows the tempo down for an almost bluesy feel on a couple of his classics "I Got A Woman" and "That Lucky Old Sun". The organ in "Georgia On My Mind" adds a more gospel feel to his soulful ballad. Charles gets on a roll, tickling the ivories on the previously unreleased "In The Evening (When The Sun Goes Down)" and gleefully playing around with the audience on "Making Whoopee". The Raeletts get the spotlight, especially Lillian Fort, on the song "Don't Set Me Free", but the inclusion of the unreleased numbers (Busted, Two Ton Tessie, My Baby) help flesh-out Charles' entire performance.

The sound on this re-mastered album is almost like being in the front row. Also included are new liner notes by music historian Bill Dahl as well as a couple of snapshots from the performance. This new release is well worth the upgrade from the previously released album. Visit concordmusicgroup.com for more information on this release.
Posted by JP's Music Blog