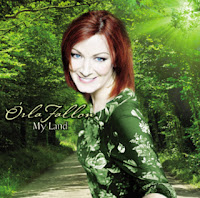 Singer/harpist Orla Fallon, formerly of Celtic Woman recently released a new album entitled “My Land”. The album is the soundtrack to her show of the same name. Orla filmed the recording for this album at the Royal Hospital Kilmainham in Dublin, Ireland. She mixes in her solo material along with Irish and American favorites.

Her voice stands out beautifully on the simple “Distant Shore” and shows us innocence in “Morning Has Broken”. The acapella version of “Down To The River to Pray” is so wonderful that you wish she did the entire album like this with the Dublin Gospel Choir. But they are not the only guests to appear on her album. The traditional “Red Is The Rose” features Tommy Flemming adding his award winning vocals to this duet. Orla puts her heart and soul into all of these performances, but you feel her dedication to Irish music in the title track, “My Land”. The album closes with a couple of fun live songs, “Spanish Lady” and “I’ll Tell Me Ma” featuring the legendary Irish band the Dubliners.

Orla Fallon’s “My Land” premiered on public television back in February, but has been repeated a number of times. Viewers that make a donation to their local public television station during broadcasts of “My Land” will receive either tickets to her upcoming tour, a DVD of the show or a copy of the soundtrack to the show. For a complete list of tour dates and information on obtaining a copy of her new release, visit Orla Fallon’s website at orlafallon.com.
Posted by JP's Music Blog