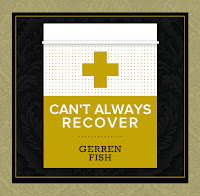 Right from the beginning, you would think this was a new album from Elvis Costello as Gerren Fish's voice reflects the same tone as Costello's. The Atlanta native is finally releasing his solo debut album entitled "Can't Always Recover". The album carries a very laid back feeling as displayed in the title song "Can't Always Recover" and "Georgia Don't Know", but it works. The album won't blow you away, but again that's not the point. Songs like "Hazard Lights" and "Sarasota" just give you enough to want to keep attentive to Gerren's lyrics.

The album was recorded and produced by Ben Sanders along with Cory Henderson. Gerren Fish and his band have a handful of dates in the Georgia area. Visit his website at gerrenfish.webs.com for more information on his new release as well as future shows.
Posted by JP's Music Blog