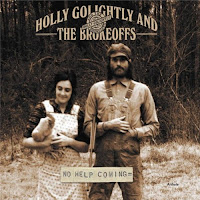 Singer Holly Golightly has spent the last two decades in the music industry trying to find the right formula for success. First as a member of the girl band Thee Headcoatee in 1991, then releasing her first solo album in 1995. She continued mostly solo, releasing 14 albums over the next 15 years. Her latest release entitled "No Help Coming" will be released on April 26 through Transdreamer Records.

The simplicity of the instruments helps us to focus more on Holly's vocals. Her voice in the opener "No Help Coming" reflects a young Wanda Jackson with her rockabilly flair. The lyrics and sound of "The Rest Of Your Life" turn dark with the subject of stalking former lovers. Bandmate Lawyer Dave can be heard backing-up Holly's vocals on "Burn O' Junk Pile Burn" before his turn at the lead vocals on "Under Arrest". The rawness and energy of "Get Out My House" gives the Americana feel of the album a little boost, before the slow romp of "The Only One". Holly's vocals in that song carry a 60's girl group vibe. The gentle flow of "River of Tears" is just the perfect collaboration of words an music.

Holly Golightly & The Brokeoffs were former winners of the Independent Music Awards for best Americana album for "Dirt Don't Hurt". Holly and her band will begin their tour at the end of April. Please visit her website (hollygolightly.com) for a complete list of tour dates and album information.
Posted by JP's Music Blog