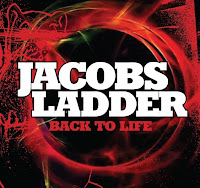 Florida's own Jacob's Ladder have been on the music scene for almost a decade now and have been making a name for themselves by their outstanding live performances. The band is releasing their new EP "Back To Life" on April 1 and are offering fans a little more with this release. The new album was produced by Carlos de la Garza (Neon Trees, Reel Big Fish).

The trio comes out strong with the title track showing off the band's experience in creating songs that express the energy that put into every song. "Enchantment" slows down the tempo to express the song's heartfelt lyrics. The groove of "The Silence" gives the song a rock-funk sound that the band seems to have fun with.

Jacob's Ladder has a EP release show lined up for April 8th down in Miami, FL, but look for them on to go on a full-fledge tour soon. In the meantime, visit their website, jacobsladdermusic.com for more information.
Posted by JP's Music Blog

Ever since Landau first appeared on AGT, I've been anxiously awaiting his first album. Got my first copies today!! Yes, I certainly ordered more than just one! And, I'm so glad I did. At least now while I'm waiting for his second album, I'll be able to enjoy the first. If I wear one out, I've got plenty more to keep on listening.