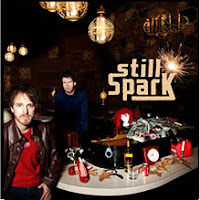 The Los Angeles duo of Seth Freeman and Dan O'Leary are the backbone behind rock's newest hit makers, Still Spark. There self-titled album was produced by Kay Hanley (Letters to Cleo, Miley Cirus) and Chris Zerby (Helicopter Helicopter, Hello Dragon) and features performances from members of Letter To Cleo, Our Lady Peace, Mighty Might Bosstones, Five For Fighting and more.

The album's first single, "Love Comes Calling" is a perfect introduction to this guitar driven pop/rock band. The chemistry between Seth and Dan is evident on the songs "The Way I Am" and "Best Times". Just the way their voices and guitars mesh is a formula for success. The band goes a little bluesy on "Careless Thing", but lyrics about relationships shine bright in the songs "Still On Your Side" and "The Limelight".

Still Spark's new album was released back in March and is available through the band's website (stillspark.com). You'll also be able to see videos and find out about the band's latest tour dates.
Posted by JP's Music Blog

his name is DAN O'LEARY, not Don.

Yes, love comes calling is a perfect introduction to this guitar driven pop band. , a nice article for who just love music, thanks for posting about so many things and loved all the posts.
noleggio casse audio

You should continue sharing your reviews. I enjoy reading them. You know a lot about music.